BBC Micro connects to WiFi, accesses games over the Internet.

BBC Micro connects to WiFi, accesses games over the Internet. 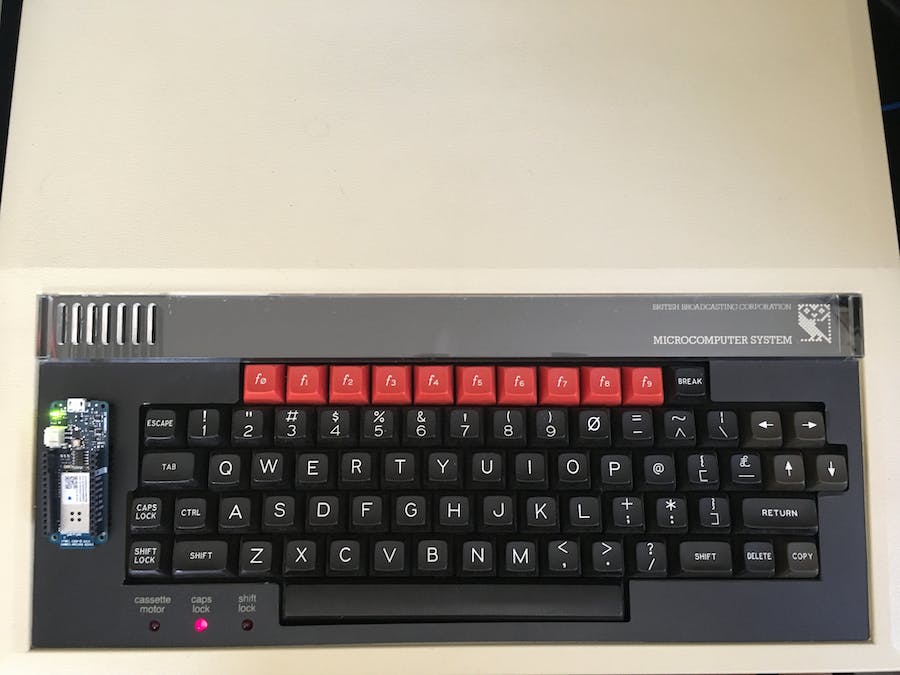 This project adds Internet connectivity to a 1980s BBC Micro using the Arduino MKR1000 with WiFi.

The BBC Micro can search the bbcmicro.co.uk archive for games disc images and loads them from direct from the web.

There is still more to do, but Chuckie Egg, Frak, Repton, Pac-Man, Knight Lore, Jetset Willy tested OK so far. :)

Searching for and loading games on the BBC Micro

I got my first Arduino MKR1000 recently and noticed it fitted nicely into the 'ashtray' hole poked to the side of my BBC Micro keyboard (the hole has been there since the '80s...). So, I thought I'd try connecting them.

This project builds on Acorn community efforts to implement BBC Micro file system host in an Arduino. HostFS is very powerful - in this case it enables the Arduino to execute filesystem commands for the BBC Micro.

There are hundreds of games on bbcmicro.co.uk stored as Acorn DFS disc images (.SSD). The project enabled the BBC to support two new commands, *SEARCH and *MOUNT, that allow the BBC Micro to search for and mount any of these images as a virtual 'floppy disc'.

When the BBC Micro issues a *LOAD, it sends a request to the Arduino. By using an HTTP range request, the Arduino can load specific memory regions of the disc image from the web server - and relay them to the BBC Micro.

The Arduino needs to connect to your WiFi access point. You will need to define the SSID and password in the secrets.h file

//Edit this section for static IP, remove for DHCP

Edit as required, compile and upload to the Arduino MKR1000.

In our project, the BBC Micro becomes a file system client to the Arduino. In other words, every disc command you type in the BBC will sent to the Arduino to handle. This opens up a lot of possibilities!

To do this, UPURSFS client ROM image must be downloaded, burnt to an EPROM and inserted in a spare BBC Micro ROM socket.

The BBC micro has an internal PSU so mains voltages are present. Be sure to switch of the machine and be careful when working on it. I've found the BBC micro to be a robust machine, but any modifications or additions you make are at your own risk!

Connecting the Arduino to the BBC Micro

The Arduino is then connected to the BBC User Port for a UPURS connection- this gives us 115200 baud serial.

All signals be level shifted: 5v at the BBC and 3.3v at the Arduino - we do this with the bi-directional level shifter. On the BBC side, the ROM assumes RX and TX levels are inverted. We use an external hex inverter (SN74ACT14N) so the Arduino is presented with standard 115200 baud serial.

With the BBC Micro powered on

So when in MODE 7, typing

will send BBC screen to the Arduino console

This was my first MKR1000 project, and I'm pretty happy with the start!

But there's still lots to do. Lots of tidy-up, debugging and optimization still required. And many TubeHost functions still need to be implemented.

(And yes you can instead download games onto an SD card from a PC, and buy an MMC add-on for the beeb, but where's the fun in that!)

Email, web-browsing... teletext browsing!? There are a lot of possibilities...

Hopefully this project inspires more development in this area. :-) 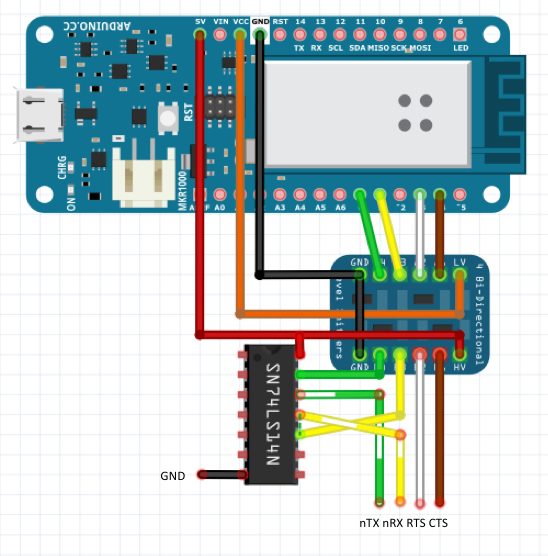 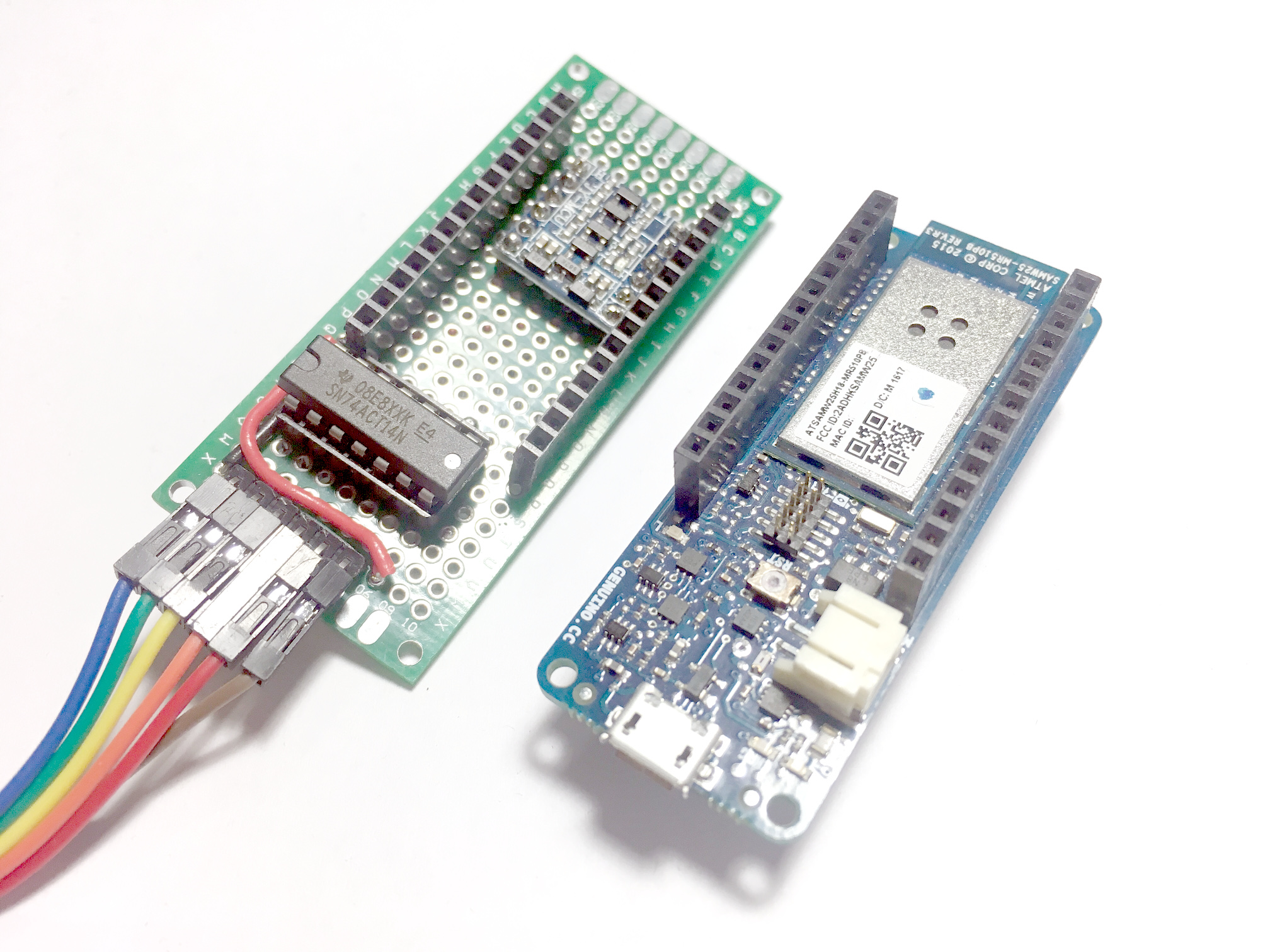 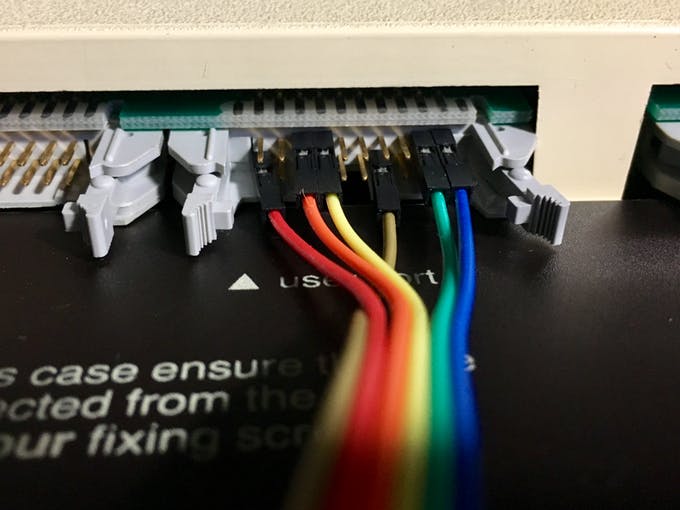