A simple project template showing how to establish a connection between two ESP32-based devices. Works both in LAN and through the Internet.

ESP32 to ESP32 Communication Over the Internet

ESP32 to ESP32 Communication Over the Internet

A simple project template showing how to establish a connection between two ESP32-based devices. Works both in LAN and through the Internet. 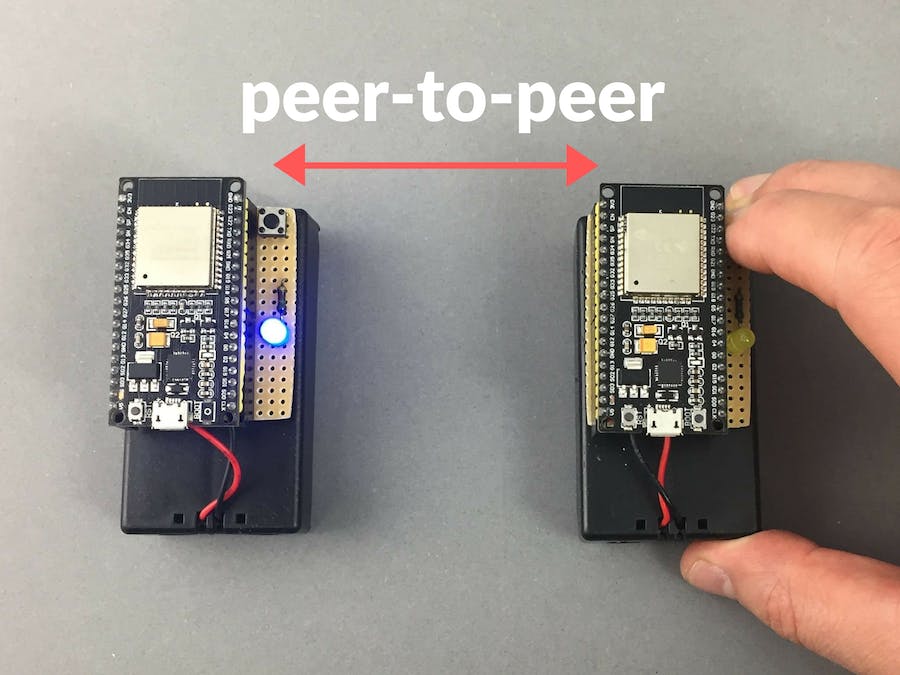 [Edit: Jul. 9, 2021] The project has been improved, fixed and ported to platformio from ArduinoIDE. Issues from comments below should be already fixed.

Typically connected projects has some kind of web or mobile UI. If you want to control one thing by another thing, espacially with a low latency and over the Internet that's quite hard to achieve. That is why I created this project. It's an Arduino framework template showing you how to connect two ESP32-based boards over the Internet, minimizing the latency with auto-recovery functionality in case of broken Wi-Fi connection or temporary power down of one of connected boards. The cool thing is that, it works if ESP32 boards are in the same Wi-Fi network and if are in separate networks. Even on different continents.

The template we are describing here can be a base for variety of cool interfaces to your ESP32-based projects, like:

and much, much more.

Default functionality of the template is two-directional control of LEDs by buttons of oposite ESP32 boards. You can also treat this template as a Morse code Internet communicator :). Feel free to replace code to controll buttons and LEDs by any input/output operation you need.

Wi-Fi task is written to auto-switch to another Wi-Fi network if a current connection is broken. In the configuration section you can hardcode more than one Wi-Fi network credentials - that is a comfortable solution, because you don't need to reprogram your boards if you power them on in different locations.

Basically a Virtual LAN network between ESP32 devices is created thanks to these two lines:

Connection is also fully encrypted, secure, and private. It works not only in LAN, but also through the internet, because connection is powered by Husarnet - an open source P2P VPN client that is as lightweight as it works not only on normal computers but also on ESP32 microcontrollers. Husarnet helps only in establishing a connection over the internet and user data isn't forwarded by it's servers. Thanks to that latency is lower.

Clone a project from a GitHub repo and follow these steps:

You will find your Join Code at https://app.husarnet.com
-> Click on the desired network
-> Add element button
-> Join Code tab

And that's all! I hope you will like it. Would be happy to see your feedback.