A new way to control your laundry cycles!

A new way to control your laundry cycles! 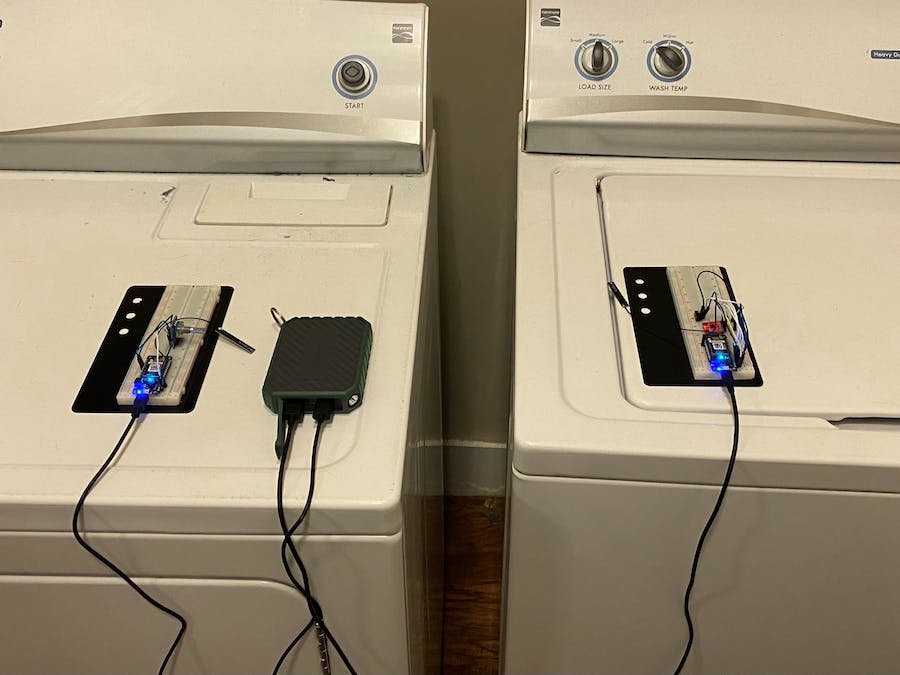 Our project is a laundry machine sensor that can notify a user of when their laundry loads are complete, for both washing machines and dryers. Have you were wanted precise control of your laundry cycles anywhere in your house? Then this is for you!

3 Particle Argons were utilized for this project. One was a central location for data and outputs, while the other two were for the laundry cycles. The washing machine circuit measures acceleration in the X, Y, Z planes to detect motion from the machine. The timer circuit was used as a timer for the dryer. A rotary dial allows the user to set how long they want their dryer to run. The central circuit will sound a buzzer when the timer runs out, given that the room the circuit is in has enough ambient lighting to signify that the room is occupied. Communication across these circuits was through the Argon publish and subscribe functions.

Our first circuit was the timer circuit. This was our simplest circuit to construct, but coding to communicate with the central circuit was a challenge. A simple rotary encoder was used to set the timer, with each click being one (1) minute of time

The central (Buzzer/Light Sensor) circuit was very complex to set up. There are several components utilized here, including a light senor to detect if the room the circuit is in, is occupied. This was the also the most complex to code, given that we needed to send data both ways for two different Argons. The light sensor detects if the ambient light is above the threshold for a person to be active in the room. The buzzer sounds when the Timer (set initially by the Timer Circuit) for the dryer, runs out. For the washing machine, the D7 LED light will turn on when there has been no motion detected by the Accelerometer Argon for 10 seconds.

The accelerometer circuit contains a SparkFun Triple Axis Accelerometer Breakout (ADXL335). This was used to measure the movement of a washing machine. When the movement stops for the set time, a short delay occurs before the buzzer on the central circuit will sound.