A little box powered by an Arduino Uno, an Adafruit MP3 Music Maker Shield and an NFC breakout board to play MP3 with the command of a tag.

A little box powered by an Arduino Uno, an Adafruit MP3 Music Maker Shield and an NFC breakout board to play MP3 with the command of a tag. 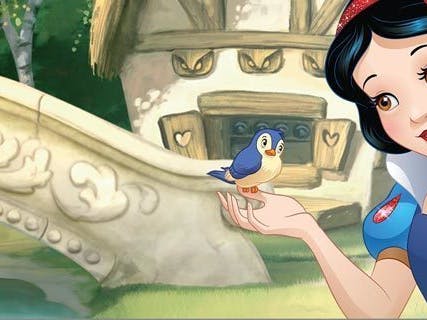 Fairytale is an Arduino powered mp3-player designed to play audiobooks (or any MP3 for that matter) from an SD Card. The user controls this playback, that is which Audiobook or Album to play, via NFC tags that he/she may bring near an NFC Reader.

This tags could for example be attached to little figures - such as Snowhite. Of course you could just put them on little dices or whatever suits you - just keep in mind that my box is supposed to be used by my 4 year old daughter and therefor I use little figures.

Fairytale operates from an Arduino UNO V3 onto which an Adafruit Music Maker Shield is attached.

for volume control and 4 buttons for pause/unpause, next or previous track selection and light effects (turning them on and off).

Oh, yes and then of course there is an LED for light effects :-) for warnings and for errors.

As there is no screen included with this MP3 player, certain situations (mainly warnings and errors) are spoken.

To read the story that initially inspired me to do this project, visit: https://gist.github.com/wkjagt/814b3f62ea03c7b1a765

I started this project off on a Raspberry PI but gave up on it - mainly for three reasons:

1. The Raspberry PI needs way too much time to startup

2. I can't just turn it off because of the danger of damaging the SD Card

3. The volume of the sound output of the RasPi is very limited

All in all, the RasPi approach is not as failsave for a 4 year old, so I gave it up and used the Arduino UNO as the base platform. If you'd nevertheless like to give the RasPi approach a try, you can find the latest state of work in the sub directory RASPI-stuff - be aware though that I never finished it and that there is no guideline on how to build it.

This is what I present here, an NFC controlled MP3 Audiobook Player for my daughter based on an Arduino UNO, Adafruit Music Maker Shield and Sunfounder PN532 NFC Breakout Board.

This section explains components and hardware layout as well of wiring the different components that make up Fairytale.

All components are of course put into a "little" box - mine is made of wood and I bought it from shelf. I dismantled the top lit and exchanged that with a plain plate of same size.

To be honest, this whole layout is a very unfortunate design choice, as the sound is not that strong and clear as it could be. If I'd had it directed to the front, of course the sound would have been stronger and possibly not as muffled, but I wanted to have the volume control (see below) to stick out of the front).

The NFC Reader is attached to the underside of the top of the box and the top itself is fixed to the box via small nails. I also carved out an oblong opening in this top plate to make room for the 4 buttons. The buttons are again fixed to the top plate by means of a small piece of wood glued to the plate - see pictures here.

The Adafruit Powerboost 1000c is glued to on side very low to the bottom of the box and the battery is standing upright in the front left corner. For this I had to create a small opening in the plate that supports the speaker.

Opposite the battery the Arduino UNO with attached Adafruit Music Maker Shield is glued to the box. This allows for a small opening on the back of the box. This opening can be used to retrieve and insert the SD card from / into the Music Maker Shield and it also gives access to the USB port for programming purposes of the Arduino - all this without the need to open the top plate of the box.

The 4 buttons (see below) are on the top plate and the volume control pot is on the front.

Also on the front is the operations light, whereas the Error light (also used for LBO) is on the back. The warning LED is on the left side. You can see my design in the pictures.

Additionally there is a programming button (A3 see below) included that will change the program in such a way that it will wait for a "new" tag, ask for a directory and track number to associate with this tag and will update the TrackDb accordingly. For this to work the box of course would need to be connected to the Arduino IDE and the serial console must be active. Functionality is not yet implemented)

All 4 control buttons are attached to only one analog pin (here A1). To distinguish which button was pressed, I made sure every button has a resistor with a different Ohm attached to it's input pin. I used:

A potentiometer connected to analog input pin A0 on the Arduino is used for volume control. While playing a track the program checks for changes on the potentiometer and calculates the corresponding volume from the level of the pot.

Used Pins of the Arduino UNO:

Quite a few, if not nearly all, of the pins of the Arduino are used up.

- 5 : ledPin : the pin to which the operation led is connected to

- 8 : warnPin : the pin to which the warning led is connected to

- A0 : volumePotPin : the analog input pin that we use for the potentiometer

- A1 : btnLinePin : pin to which the button line (4 buttons) is connected to

- A2 : batLowInputPin : the pin on which the powerboost 1000c indicates a low battery (LBO) - ouput done via errorPin (not yet implemented)

- A3 : programming : the pin the program button is connected to (not yet implemented).

The Arduino has very limited power and ground output pins, so I decided to get +5V and +3V and Ground from the Adafruit Powerboost and have a little "power line duplicator" - This power line duplicator is essentially a little (3cm x 1,5cm) plate onto which a couple of male headers are attached which are connected to +5V, +3V and GND of the Powerboost - This gives me 5 pins for +5V, 5 pins for +3V and also 5 pins for Ground.

To this "power line duplicator" I attached all external components that needed plus voltage and ground - such as the PN532 NFC Reader breakout board or the power for the buttons and the volume control.

I also had to restrict the number of input pins used by the buttons, as quite a lot of the digital or analog input pins of the Arduino are already used up.

I connected the 4 control buttons to only one analog input pin (here A1) and used different resistors to distinguish which button is pressed. I took the input power from the +5V line. The buttons output is also tied (via a 10KOhm resistor) to ground to keep it from floating.

The volume control potentiometer is attached to A0 and is also connected to ground via a 10KOhm resistor. It's input voltage is taken from the +5V line.

The programming button is attached to the +3V line and tied to A3 with it's second leg - no ground connection.

The Adafruit Powerboost 1000c comes with an LBO (Low Battery Output). This usually ties to the battery plus line but ties to ground once the battery reaches a level of roughly 3,4V. So I attached a wire to the LBO pin of the Powerboost and connected it to A2 plus ground (via a 100KOhm resistor)

ATTENTION: This is not yet operational!!!

The Fairytale program will play albums (audiobooks or music) stored on the SD card inserted into the Adafruit Music Maker Shield. Selection of the album/audiobook to play is done by placing corresponding NFC Tags on the NFC Reader.

Upon detection of an NFC Tag, the program will retrieve the tag's UID and use this to scan what I call the TrackDB to find a matching directory to play.

The TrackDB is a list of files in a special directory (SYSTEM00) on the SD card. The TrackDB files are of the form:

In the given example:

The program will take the retrieved information from the TrackDB and then start a for-loop beginning with the provided first track until all consecutive numbered tracks are played. After playback of all files is finished, the program will resume it's main loop, delay operation for roughly 15 seconds (to give the user the chance to remove the just used Tag from the reader) and then wait until it detects the next tag.

While advancing through the files in the directory, the program will update the TrackDB-File with the number of the currently played track. Doing so allows for interrupted playbacks - tag is removed and later put back on when the playback will start with the last track in playback.

For this to work, a couple of restrictions are in place:

2. You can have a maximum of 127 files per directory - as I use a char to count the files to preserve memory

3. All directory names must be exactly 8 chars long - use any combination of a-z and 0-9 chars for the name

4. if a file is missing in a consecutive order of files in a directory, you may get a (very short) pause which might result in a glitch in the sound while the next track number is calculated

5. All directories must be directly in the root- directory of the SD card - no sub directories are allowed as I use a char array of 9 chars for the directory part of the path to the file.

While the album (or file) is played an operations light is fading up and down in intensity.

On warnings or errors a warning or error light is lit up respectively.

There are 3 different warning or error conditions:

Additionally we distinct warnings and errors for whether or not we need to turn off the box.

Errors shown via the error light (also cause the system to halt and the Box must be turned off):

Warnings shown via a light (Arduino can stay turned on):

Additionally if the Adafruit Powerboost 1000c detects a low battery level (LBO of the Powerboost ties to ground) the error LED is shown. Surely the Arduino will turn off at some point from now, but until then it will continue to operate.

Additionally to the warning or error lights certain messages are spoken through the music maker shield.

Voiced errors and warnings are: